You have probably experienced it before: pulling up your pants because the belt you bought from a department store could not keep up to the weight of your firearm. It is not only annoying but unsafe.

Can you imagine dropping your firearm in a crowded place?  How embarrassing and dangerous would that be, right?

That scenario won’t happen if you have a good gun belt. With a gun belt, you can keep your holstered gun close to you without letting it slip or fall.

Keep in mind that it is your responsibility to keep your gun secured. The last thing you want to happen is for somebody else to get hold of it just because you don’t have the best gun belt.

Not sure which concealed carry belt to get for your weapon? Don’t worry as we got you covered. This article lists down the best gun belts available in the market today and gives you tips on how to shop for the right gun belt.

Gun belts can be classified according to the type of material used and buckles.

There are two materials commonly used in gun belts – leather and nylon or scuba webbing. Leather is arguably the more popular, favored for its durability.

The dual-layer of leather is even better. Nylon may not be as durable as leather but it is cheaper, though.

Then there are gun belts classified according to the buckles. Four of the most common are traditional, slide, track, and cobra.

You’ve likely seen a traditional belt buckle with a set of eyelets where the prong goes through so that it can be held in place.

The slide is the type of buckle where tension is utilized to keep it snug, making it easy to adjust on the fly.

The track belt, meanwhile, features a track on the back of the belt for locking.

Last but not least is the cobra buckle which is the most commonly used in tactical belts.

Choosing a gun belt can be quite confusing because most of them look the same. Fortunately for you, we have taken the effort to review the best gun belts available on the market. 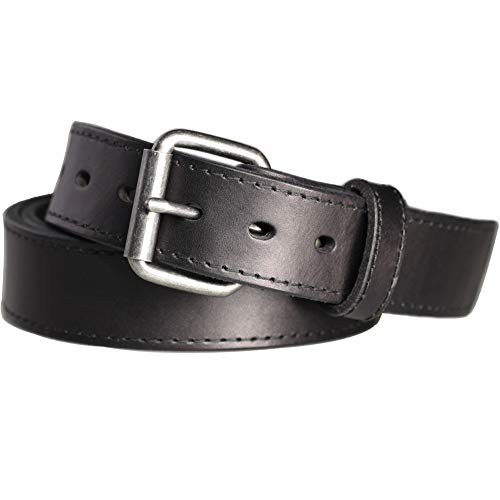 Made of 100% full-grain Italian leather, this concealed carry belt is thick enough to provide a good anchor to your concealed holster.

Moreover, it is strong enough to carry your weapon and discreetly designed for everyday use.

This belt is 1.5 inches wide and guaranteed not to sag or rollover. Built to last for a long time, the belt features recessed stitching and seven holes measuring about 1inch in diameter.

The manufacturer is confident about the quality of this gun belt that it is backing it up with a 100-year warranty.

Of course, the main reason why you’re buying a gun belt is to conceal your weapon and this product does exactly that. It hides the shape of the holster a lot better than an ordinary belt.

Plus, you won’t have to tighten it as much to hold the weapon. 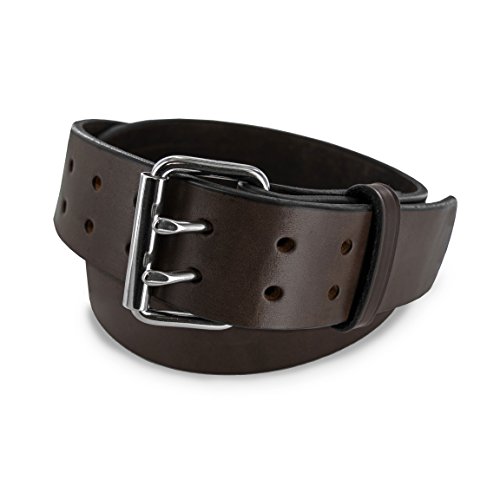 Hanks may just be the most revered brand of gun belts. The New York-based firm also manufactures casual belts, wallets, and leather accessories. But it is best known for its gun belts.

The Marshall is a 2-inch wide CCW gun belt that is highly recommended for gun owners who prefer a garrison-style belt.

Made entirely in the United States, it features a dual prong garrison style construction for secure fastening.

Made from vegetable-tanned leather, this belt is tough enough to withstand daily wear and hold up to weeks of outdoor hunting or excursions.

The roller buckle, meanwhile, is replaceable so it can customize its look. It is held on with Chicago screws for quick and easy buckle replacements.

You’ll also love the fit of this belt. It is thick yet supple. It won’t dig into your abdomen even if you have been wearing it the entire day. Lastly, the belt fits most tactical pants and jeans. 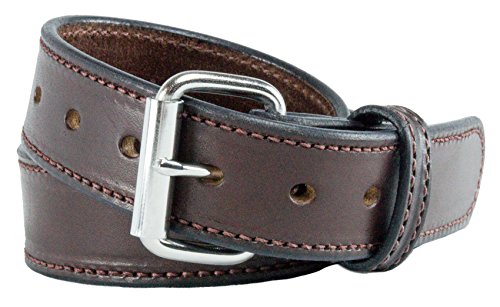 This gun belt has a heavy-duty design and won’t split like your ordinary belt. Built to last, it is made of full-grain US leather.

It is strong enough to hold your gun with some ammo but discreet enough for daily wear.

This gun belt weighs just 14 ounces which gives you an idea of how lightweight it is. Despite being lightweight, the Relentless Tactical gun belt is strong and durable.

It won’t stretch, sag, or bend. It can give you a secure and strong platform for your holster, flashlights, and mag pouches. It can even support a full-sized pistol. 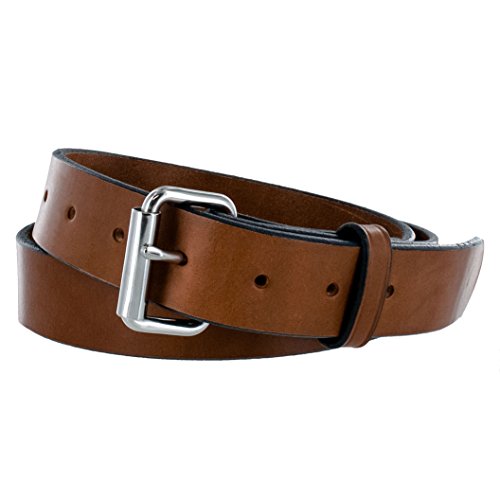 Hanks gets another entry into this list with the Gunner gun belt. The Hanks Gunner is a thick and durable gun belt made in the United States.

It is made from 100% full grain leather which makes it nearly indestructible. It is 1.5 inches wide and 23 inches thick. It is guaranteed not to sag and rollover.

The buckle is removable and can be fastened with Chicago screws. This makes changing the buckle a lot easier.

Hanks also backs up this item with a 100-year warranty and free exchange. This is one of the best gun belts you can get today.

Despite being stiff, it is flexible enough to be wrapped around the waist. Additionally, the steel core prevents it from sagging or stretching.

From afar, this gun belt looks like your ordinary belt. But a closer look would reveal that it is sturdier. It is also capable of holding a handgun plus a couple of mags on the side.

Also, the buckle is attached with leather grommets and not stitched in. This makes it easy and convenient to swap your buckle for a customized one.

To give you a better appreciation and understanding of what to look for in a gun belt, we’ve listed some of the factors to consider when shopping for one:

Watch this YouTube video to get a better understanding of why you should use a gun belt; and how to choose the right one for you.

Gun belts may not be the weapon that you use to defend yourself, but even if you are a skilled gunner, you may be taking a risk if you use a cheap and run of the mill gun belt.

With a good quality gun belt, you can have the peace of mind knowing that you can draw your weapon anytime without any issues.

Choosing the best gun belt can be quite a task especially if you have no idea what to look for in a gun belt. We have made your life easier by picking the top 10 gun belts available online.

Refer to the reviews above to get an informed decision on shopping for your next gun belt; one which can spell the difference between life and death.